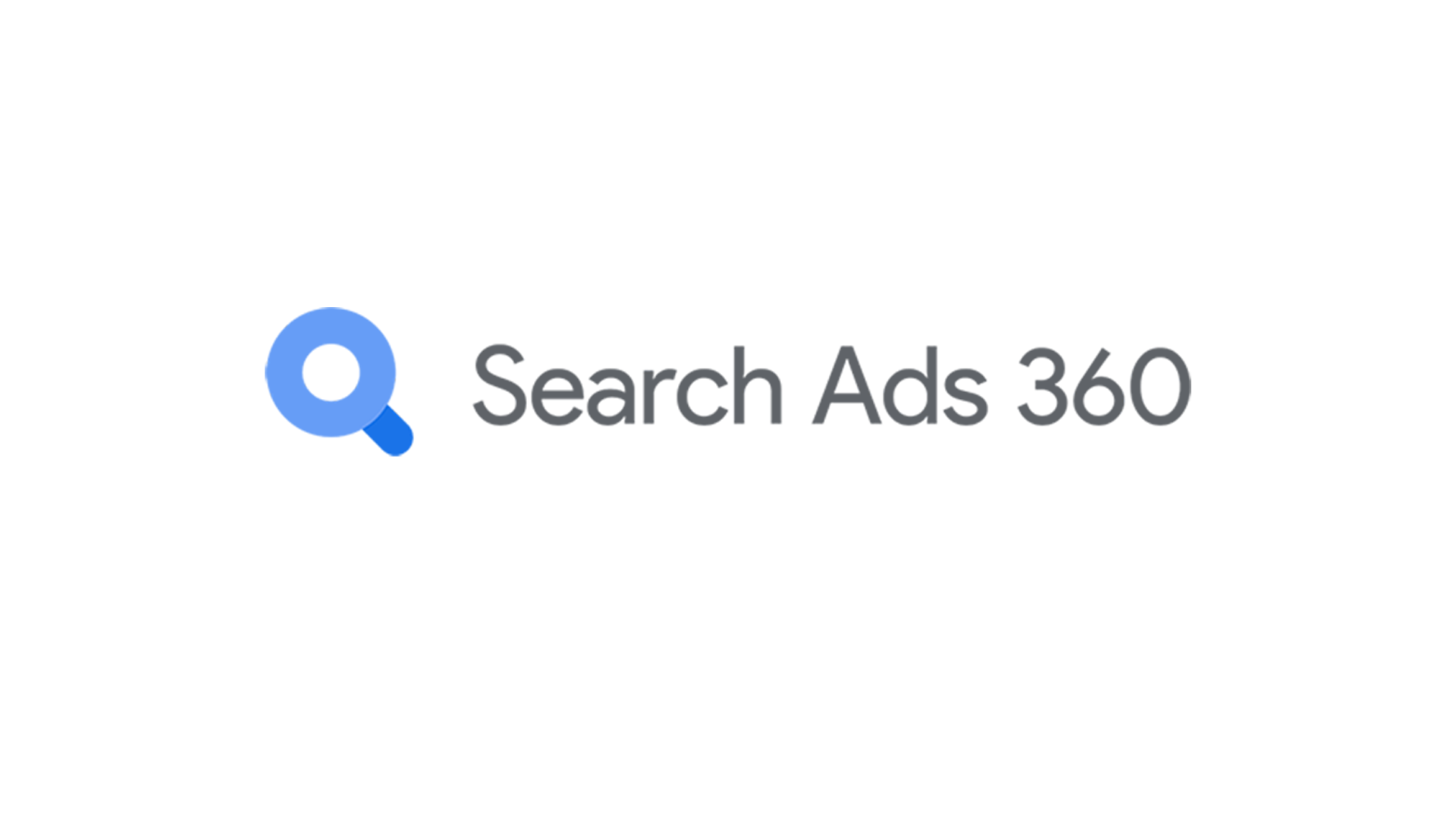 Bidding in the New Search Ads 360

Five months into the roll-out of the New Search Ads 360 (SA360) experience and we find ourselves at an important stage of the journey: the bidding migration. Until now, all features relating to bidding were held back in the previous SA360 whilst users were tasked with familiarizing themselves with the new navigation and workflows that the updated UI presented. However advertisers are now being given the option to migrate their bidding over to the new UI.

This following content provides an overview of what this process looks like, and what you should look out for in terms of additional features and workflows that this migration unlocks.

The most important change to bidding is one that would not be immediately noticeable to the standard user, but one which profoundly alters the way in which bid strategies are set up and reported on in SA360. Underpinning the new UI’s approach to bidding is the shift away from bid strategy-assigned conversion goals, in favor of broader sub-manager (formerly advertiser) level goal assignment (very similar to assigning your Default Conversion Goal in the legacy SA360 UI).

Image title: How to include a conversion action in bid optimization

This setting can be edited for each conversion action – allowing you to specify exactly which conversion actions(s) you want your bid strategies to optimize towards. In doing so, this also defines which conversion data is reported against the default ‘conversions’ and ‘conv. value’ columns. This is important to ensure that you have a solid set of custom conversion columns in place to maintain consistency in your reporting, irrespective of changes you may be making to your sub-manager level conversion actions. 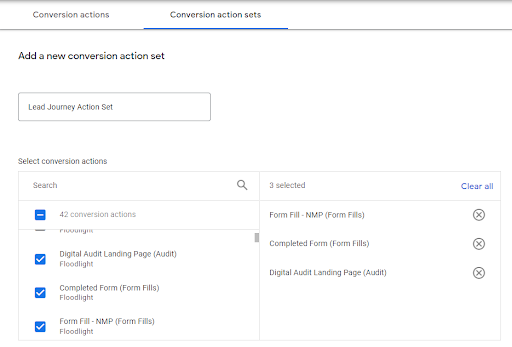 These can be helpful where an account may have more than one primary goal, and certain campaigns are required to optimize towards a KPI that doesn’t align with the sub-manager conversion action. 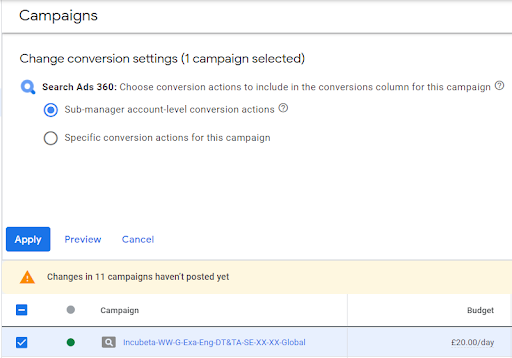 Bringing this all together, we have a simpler workflow with bid strategies automatically configured and aligned towards a client’s primary goal upon creation, with an option to divert away from this at campaign level via conversion actions sets, should a user wish to do so. Conveniently, ahead of the New UI bidding migration opt-in, all advertisers have been pre-configured with the correct sub-manager level goals and conversion action sets based on existing legacy default conversion goal and bid strategy assignment. Users should sense check these settings in the New UI before opting into their bidding migration.

What is the bidding migration and how does it work?

Over the last couple of months, users will begin to see their sub-managers become eligible for bid migration in the New UI (found under the Experience Hub > What’s available).

Advertisers who are not yet eligible may have a number of blockers relating to existing bid strategy set up in the legacy UI (for instance, non-alignment with a default conversion goal for shopping campaigns) so it’s recommended that you reach out to your SA360 account rep for support.

For those advertisers who are eligible, the migration process is very simple and automated. The first step is to ‘opt-in’ to the migration, at which point, the physical migration will be scheduled to take place over the course of the next calendar Wednesday.

The migration itself is then automated (and handled by Google engineers), during which time you will be unable to make any changes to bidding in both UI’s. Importantly, upon completion of the migration, you will no longer be able to create or manage bid strategies at all from the old UI, which will become read-only – so it’s critical to ensure that you’re ready to fully commit to the new UI’s bidding workflow before opting in.

Fundamentally, the migration is only a front-end and workflow change with no physical changes actually made to the underlying algorithms and bid strategies themselves. Therefore, advertisers should not encounter any performance changes throughout this process.

Upon successful bid migration, users will now be able to create and manage their bid strategies from a dedicated tab in the New UI, in the ‘tools & settings’ tab (a similar workflow to Google Ads).

From here, it is possible to review top level performance across all of your bid strategies, edit basic settings such as targets and constraints, and create brand new strategies. Clicking into a specific bid strategy will provide you with a hygiene status, new ‘top signals’ reports for ATB strategies, an improved forecasting tool for non-shopping strategies, and the ability to edit your main bid strategy settings. As mentioned previously, the assignment of conversion actions is now handled at either sub-manager or campaign level, so be sure to check these settings ahead of creating a brand new bid strategy and assigning it to a campaign portfolio.

Broader bid strategy best practice remains unchanged in relation to minimum conversion volume requirements for tCPA/tROAS, portfolio composition and target setting so be sure to review these ahead of any new bid strategy creation.

Beyond the new bid strategy workflow, advertisers will also have access to a whole host of new features and improvements to the ways in which they can manage and optimize their bid strategies.

Firstly, there have been improvements made to both seasonality events (useful for changing the behavior of your bid strategy ahead of a known upcoming event such as a sale which is likely to impact CvR) and data exclusion events (useful for retrospectively excluding data from bid strategy decisioning) in the form of added application granularity. These can now both be applied to specific campaigns, accounts, campaign types and device segments as opposed to previously having to apply them at the bid strategy level.

We also gain access to improved tools allowing us to augment how our bid strategies make changes based on the value of conversions. Custom Variable Adjustments (CVAs) can be set up to apply a calculation on top of the raw conversion value being passed back from the Floodlight tag to a campaign. For instance, an advertiser currently capturing user status via a Floodlight variable (e.g. ‘new’ or ‘returning’) is able to apply a 2X weighting towards the ‘new’ user segment, as per below. The resulting impact of this should see the bid strategy bid twice as aggressively in auctions where it identifies an increased likelihood of driving conversion value from a new user, due to the ‘new user’ up-weighting of the underlying conversion data it has access to. 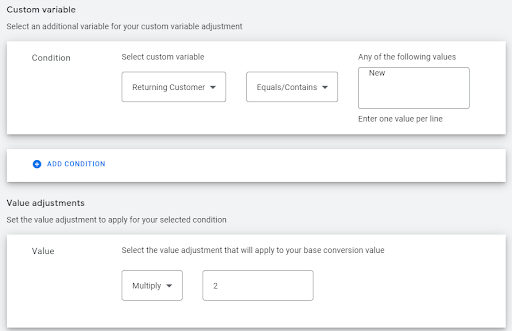 Once saved, the campaign will also begin reporting exclusively on conversion value subject to the calculations applied in the CVA, so be sure to add in the new ‘all conv. Value (original reported)’ columns into your view to maintain visibility over the raw un-calculated data.

Similarly, an additional feature called Conversion Value Rules can also now be applied at campaign level to augment the reporting and optimization of a bid strategy based on one of three dimensions – device, location, and remarketing list – the mechanics of which are identical to the above CVAs. This is arguably a bit of a throwback to more traditional bid multipliers, and should allow advertisers to gain more control over the behavior of their ATB strategies, which have previously required full relinquishment of all dimension-based user influence. 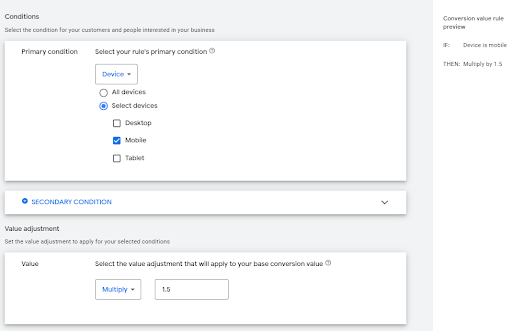 Beyond additional features and tools, bidding compatibility has also seen an improvement, with native support for Performance Max campaigns optimizing towards floodlight, although a known bug is preventing advertisers from leveraging this feature so it is advised to continue using GAds conversion tracking where PMax campaigns are concerned.

Upon successful bidding migration advertisers will also be able to begin using the Performance Center which is a new SA360 feature designed to combine the best of both worlds with regards to Google Ads Performance Planner and the old SA360 Budget Management feature. Improvements here relate to improved forecasting and automation, allowing advertisers to plan more effectively and make smarter budgeting decisions based on different scenarios. We will be covering the Performance Center in a future blog, so stay tuned to find out more on this.

For more information, or if you would like us to run a demo with you, please get in touch. 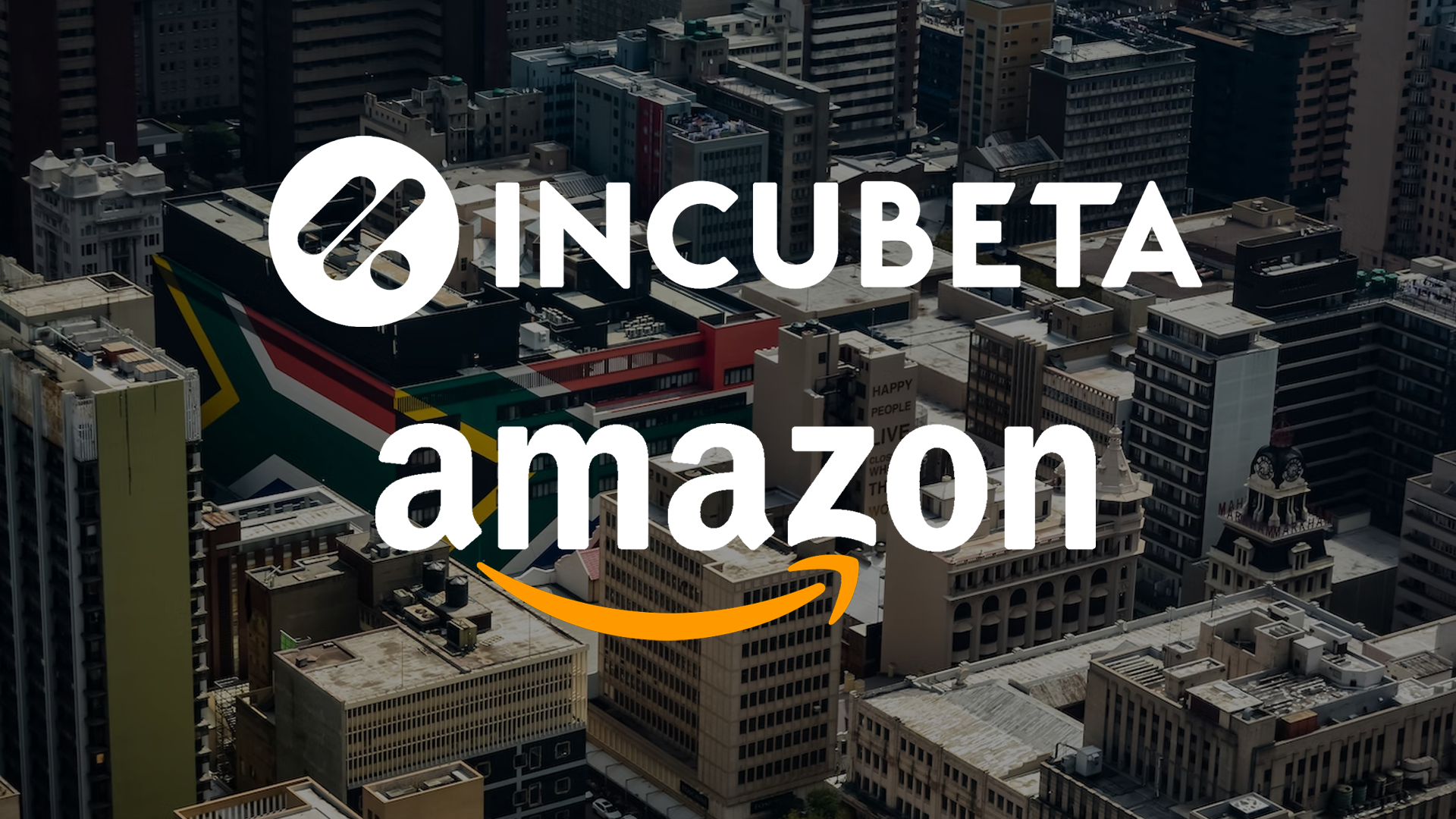 Incubeta is thrilled to announce the launch of Marketplace Solutions services in South Africa, preceding Amazon’s 2023 entry into the market. Back in September last year, Incubeta acquired global marketplace agency, Maze-One, as part of our strategic diversification of our digital marketing and advertising services. Maze-One is one of the five companies that we’ve acquired within a two-year timeframe, and the eighth acquired company overall since our inception.